↓
The Bell Ringers
Brailsford has an enthusiastic band of bell ringers, most of who were recruited for the millennium or later. We don’t aspire to greatness in the methods we ring, concentrating mainly on doubles and plain minor, although some of the group regularly attend separate treble-dodging minor practices. We ring for all services at Brailsford as well as supporting Osmaston (another church in our benefice) with four or five ringers for their services. But we need more ringers. If you are interested and would like to come along and have a go, please contact the Church Office. Your request will be passed on to the Tower Captain.
The Bells 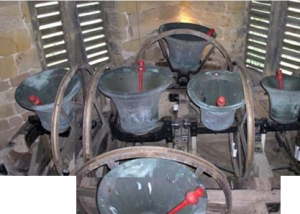 The Tenor is at the far side. Across the middle are (from the left) the Fourth, Fifth, Second and Treble. The Third is in the
foreground.
The current tower in All Saints was built about 1500. We do not know if any bells were installed at that time. We do know that there were certainly bells in the church since before 1686 since the churchwardens accounts survive from that year, and it is clear that at that time there were three bells. Ringers were being paid and in 1687 there is specific reference to the repair of both the Little Bell and the Great Bell.
There are no further details about these bells – who made them, when they were first hung in the belfry or what the frame was like. Many early bell founders were itinerant craftsmen who simply set up their casting equipment in a field near to the churchyard. This might have happened at Brailsford. It is clear from entries in the records that the Brailsford bells were hung for full circle ringing with wheels attached to the headstock. In 1687, seven shillings was paid to ‘Danl Forman for repairing the Bell wheeles’. In 1696 one pound was paid ‘for making a whele for the Great Bell’ and in 1702 there was payment for ‘spokes for bell wheels’. Over the next thirty years from 1686 the bells and their fittings were a regular source of expenditure in the Churchwardens accounts. The three bells, the ropes, the wheels, the flooring are amongst the items needing much attention and involving considerable cost. Following is a sample of the entries demonstrating the range of jobs. Each task was undertaken several times during this period.
The ‘leather for the Bell’ which occurs regularly was used to hang the clapper. It was suspended from a leather loop known. Obviously, over time this would wear as the clapper swung and would need regular replacement.
Eighteenth Century
In 1717 the Reverend Thomas Boultbee had recently arrived as Rector and the bells were obviously causing much concern. The Churchwardens called a public meeting of the parishioners of Brailsford ‘to consult and agree about the necessary repairs of the bells‘. At the meeting it was decided that the three bells be lowered from the tower, re-cast and augmented to five. A transcription of the record of the meeting follows.
[Pub]-lique notice having been given in the pish
Parish of Brailsford the two last Lords dayes for a
meeting of the pishioners this day to consult and
agree abt the necessary repaires of the sd Church
and the Bells thereto belonging; Attending to such
notice the psons whose names are underwritten did
this day meet at the sd pish Church & did there agree
that the three Bells now hanginge in the Steeple
of the sd Church be taken downe & new cast & so
much metal added as will make ffive tuneable
Bells to bee hanged up in the sd Steeple and also
such repaires made of the ffloor (on which the fframe
for the sd ffive Bells is to be set) as shall be adjudged
needfull and necessary by experienced workmen to be
employed in and abt the same and all other repai[rs]
that the officers in trust for the time being shall think necessary.
This was signed by all the ‘gentry’ in the parish (the equivalent of today’s PCC).
In the early eighteenth century, Abraham Rudhall of Gloucester was one of the main bell founders. The importance of the Rudhall Family is evident from the number of their bells still hanging throughout Britain and also in America. They were in business for 150 years from about 1684. The accounts record that the churchwardens negotiated with Mr Rudhall and employed the Foundry to undertake the task. Within a year a payment of £110 12s 0d was made to Rudhall for ‘casting and new mettall’. There was a further payment of £29 19s 0d to Fran Butcher for making the frame and bell wheels. 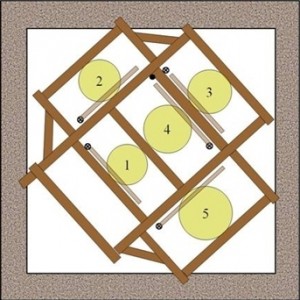 Unusually the frame was fitted diagonally in the tower. The reason for this is not known, but we can presume that it was to try to spread the stress on the tower walls when the bells were swinging. Certainly it would have been easier to fit the frame squarely in the belfry. The frame also made provision for a sixth bell, although this was only installed 240 years later.
It is customary for bells to bear a message. ‘GOD PRESERVE THE CHURCH OF ENGLAND’ and ‘PEACE AND GOOD NEIGHBOURHOOD’ are written on two of our bells. The third of the surviving Rudhall bells has the inscription ‘AND ABRAHAM RUDHALL CAST US ALL 1717’ and the mark and mouldings are typical of Rudhall’s work. Over the next 100 years, there were regular payments for repairs to the clappers and wheels and to the belfry.
Nineteenth Century
By 1815, there was obviously some new problem with two of the bells since a meeting was held with William Dobson ‘to take into consideration the best mode of Repairing the Bells’. We can only presume that the two bells had cracked. William Dobson was a bell founder from Downham Market, Norfolk He was in Ashbourne at the time hanging a new ring of eight bells. It was probably convenient to obtain advice whilst a bell founder was in the area. The outcome was that two Rudhall bells were taken down and recast. In their place two Dobson bells became the new treble and tenor – the smallest and the largest. The remaining Rudhall bells were the second, third and fourth of the ring of five. Dobson was paid£70 2s 3d in 1816 for his work. The inscriptions on the two new bells were ‘WILLIAM DOBSON, FECIT 1816. E:S COX AND JOSEPH MORLEY CHURCHWARDENS’ on the tenor, and only ‘WILLIAM DOBSON, DOWNHAM, NORFOLK, FOUNDER’ on the treble. These five bells, three by Rudhall in 1717 and two by Dobson in 1816 are still rung in the tower today. For the rest of the 19th century there is no indication that the bells were troublesome. The Accounts only refer to routine maintenance items such as oil and new bell ropes. 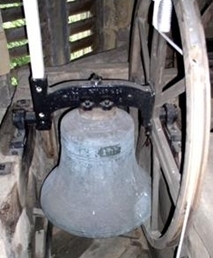 One of the three surviving Rudhall bells – the old Second

During this period the organ stood on a gallery occupying the west end of the church. Ringing was undertaken behind the gallery. A study of the marks on the walls, the holes through which the ropes travel and the iron hooks for hanging the bell ropes when out of use, indicate that ringing took place in a shallow arc at the back of the church near the west door. Two of the bell ropes came down into the ringing area with 12 inches of the wall!
During 1883 enormous changes were made to the church. One major renovation was the removal of the galleries at the west end of the church. This obviously created more space in the ringing room yet the ringing continued to take place in only part of it.
Twentieth and Twenty-first Centuries
Records show that the bells were re-hung in 1913 by Day of Eye, Suffolk. There is no indication why this was necessary. It may be assumed that after 100 years the bells were in need of refurbishment. At the same time the position of the bell ropes was altered so that the ropes fell in a circle to make it easier for ringing. In particular the second and fifth of the five bells were turned 180 degrees in their frames. Holes and marks in the floor boards are evidence of this. On April 10th 1914 the first Peal was rung on the bells. The ringers from Derby were all notable members of the Midlands Counties Association and rang in many peals. James Pagett eventually became the Ringing Master at Derby Cathedral (1927-1942). In 1932 some major work was done in the belfry for which J H Parkin was paid £66 12s 11d  (about £3300 on today‘s money). The nature of the work is unknown. In the 1930s there was a proposal that there should be three new bells to increase the ring to eight. One bell would be placed alongside the original five with the other two to be hung above. W G Player was to fund the project. instead he gave the beam across which was across the chancel arch and a new wooden pulpit. Finally in 1956, a sixth bell was installed – a new treble. After the death in August 1955 of Frederick Penny of Brailsford Green some colleagues and friends perpetuated his memory by giving a new bell to Brailsford Church. 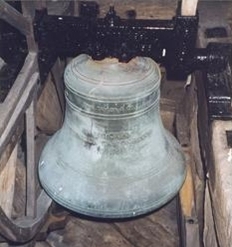 As plans matured for the addition of the bell it was found that the five old bells were in need of overhaul. John Taylor and Company, Bell Founders at Loughborough, was employed to undertake the work of restoring, re-tuning and re-hanging the original five with self-aligning ball bearings and metal headstocks. They also cast and hung a new treble bell. The frame when built in 1717 had a prepared space for a sixth bell so installation was relatively straight-forward. The work was completed during the summer of 1956 at a cost of £550 of which over £100 was raised by the bellringers.
On Sunday December 1st 1956 a service of dedication of the new sixth bell and re-dedication of the five old bells was held.

Groups in the Benefice

Also on the Web